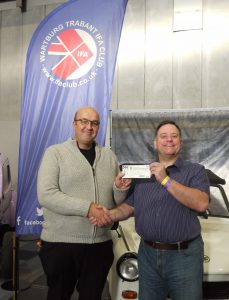 Gainsborough-based car enthusiast Kenton Rose enjoyed a day out at the UK’s premier classic car show as a VIP guest of the Wartburg Trabant IFA Club UK, the club for people who appreciate the eclectic cars of the former Eastern Bloc.

Kenton won the Club’s online competition for a pair of tickets to the Lancaster Insurance Classic Motor Show 2018 and started his day at the NEC with a visit to the Club’s Berlin Wall-themed stand.

“I’m into all the Eastern European cars,” Kenton said. “I’ve always been a fan of Skodas – my granddad had one years ago, and then I grew up round them with the family. At one point I had 17. I’ve had Ladas, FSOs – I can honestly say that I’ve had over 100 cars.”

Kenton owned a Wartburg Knight years ago and says that he would love a Trabi but at more than 6 foot tall he doubts he would fit behind the wheel.

His dream Eastern Bloc car would be a Tatra 603, the luxury car reserved for senior party officials and factory owners in communist Czechoslovakia.

Kenton works as a coach driver but over the last decade has built up a thriving photography business, concentrating on cars and aviation. He also enjoys retro caravanning and owns a 1983 Kip Kompakt lightweight ‘van which he rescued from a hedge in Grimsby and is renovating over the winter.

The UK’s largest classic car and motorcycle show returns to the NEC this year bigger and better than ever, taking over a whole extra hall to offer visitors the world’s biggest gathering of classic car clubs – including the Wartburg Trabant IFA Club UK.

With more than 2,500 classic vehicles on show and 300 car clubs, it’s a fantastic day out – and the Club is giving away one pair of tickets for Saturday entry.

To enter the draw for a pair of tickets to the Lancaster Insurance Classic Motor Show 2018, head on over to the Club’s Facebook or Twitter pages and follow the instructions!

1. The prize draw is available to people 18 years of age and over. Proof of age may be required. Committee members of the Wartburg Trabant IFA Club UK Club or immediate family of Committee members of the Wartburg Trabant IFA Club UK and parties professionally associated with the promotion may not enter this promotion.
2. Entrants will be deemed to have accepted these terms and conditions and agreed to be bound by them when entering the Promotion.
3. You can enter the prize draw via the Club Facebook page or the Club Twitter page
4. Closing date: All entries must be received by 11.59pm 31 October 2018.
5. One winner will be selected at random, after this date from all complete entries received before the closing date.
6. The winner will be notified by Facebook Messanger or Twitter DM after the closing date.
7. The Prize is 2 adult tickets for Saturday entry to the Lancaster Insurance Classic Motor Show 2018.
8. The prize is non-transferable and there are no cash alternatives in place of the prize.
9. The Promoter reserves the right to amend these terms and conditions at any time.
10. If the chosen winner is not able, for whatever reason, to accept a prize, or cannot be contacted within 7 days of the draw date, the Promoter reserves the right to award the prize to another entrant.
11. No correspondence will be entered into. Entries that do not comply in full with these entry rules and conditions will be disqualified.
12. Entry to the draw is free and it is not necessary to be a member of the Wartburg Trabant IFA Club UK to win. It is a condition of entry that all rules are accepted as final and that the competitor agrees to abide by these rules.
13. The winner agrees to allow the Promoter to use their name and likeness for a news story publicising their success.
14. The protection of personal privacy is an important concern to the Wartburg Trabant IFA Club UK. Any personal data collected will be treated in accordance with current data protection legislation. We will use your personal data for the administration of the competition. We will not share personal data provided with third parties. For more information about our data protection policy please go to https://wp.ifaclub.co.uk/privacy-policy/