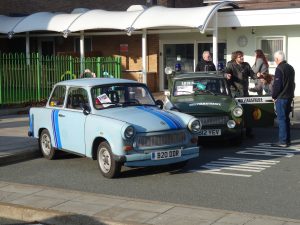 The University of Chester and the Wartburg Trabant IFA Club UK teamed up to bring an experience of life in East Germany to Cheshire.

Eight IFA vehicles, from a Barkas B1000 van fresh from the Club stand at the Lancaster Insurance Classic Motor Show, to the last East German Military Police staff car still on the road, arrived at the University of Chester’s Kingsway Campus to support the Totally East: Life in East Germany exhibition of documentary photographs by Harald Hauswald.

Dr Richard Millington, Programme Leader in German at the University of Chester, said: “The presence of the IFA Club UK and their vehicles at the exhibition really added an extra level of authenticity to the day. The visitors to the exhibition were really enthused by the photographs and the cars, and I’m very grateful to the members of the Club for coming to Chester and helping to make the day a great success.” 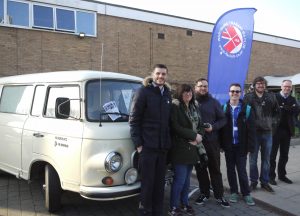 Austen said: “The exhibition gave a true insight into life behind the Iron Curtain, while the IFA Club’s presence made the event so authentic and fascinating.

“As a student researching East German identity and nostalgia, I found the event completely refreshing. Having joined the Wartburg Trabant IFA Club, I cannot wait for similar events in the future and thank all members who have made me feel so welcome.”

IFA Club Chairman Mel Holley said: “Club members found these unique photographs depicting everyday life in East Germany absolutely fascinating, and we really enjoyed the opportunity to chat about our cars and the Club with Chester students and residents.

“We’re very grateful for the invitation to support the event and hope we really added to people’s enjoyment on the day.”

The exhibition was also attended by Ian Sanders, the creator of the popular Cold War Conversations podcast. Ian interviewed Richard, Austen, and several IFA Club members for his latest episode.